The Crimson Flame, a 15-carat pigeon’s blood Burmese ruby, set a new record on Tuesday when it sold for $18 million at Christie’s Magnificent Jewels sale in Hong Kong. The gem established a new per-carat price record for a ruby at $1.2 million. 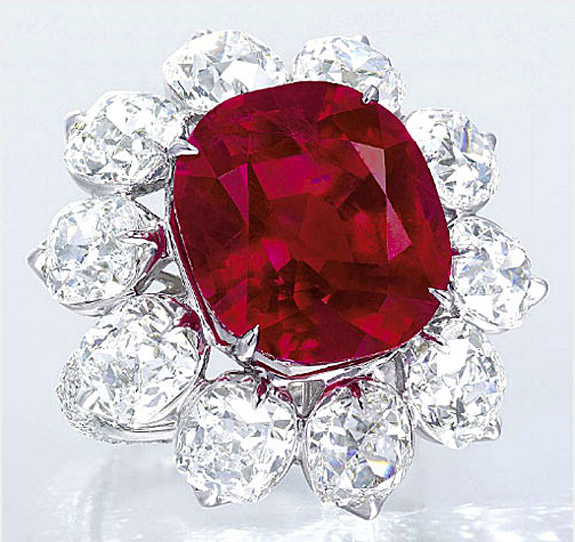 Proclaiming 2015 as the “Year of the Ruby at Christie’s Hong Kong,” Vickie Sek, the deputy chairman and director of Christie’s Asia jewelry department, was proud to put another record breaker in the books. Back in June, a 120-carat ruby-and-diamond necklace by Etcetera sold for $13 million, setting a world auction record for a ruby necklace.

The highly touted Crimson Flame’s hammer price of $18 million surpassed Christie’s pre-sale high estimate by $2.5 million. Sek had noted in November that the stone was “undoubtedly the most important pigeon’s-blood ruby to come to auction in Asia.”

The cushion-shaped ruby is mounted in a white gold ring that features a dramatic surround of smaller cushion-shaped white diamonds. A report by the Swiss Gemmological Institute affirmed that the gem is of Burmese origin and exhibits a vivid, saturated crimson color. The report stated that a natural ruby of this size and quality is very rare and should be considered an “exceptional treasure.”

Other high-profile ruby jewelry performed to expectations on Tuesday…

The first item was a ruby-and-diamond necklace featuring 32 cushion-shaped rubies — ranging from 1.04 to 5.05 carats — alternating with cushion-shaped diamonds. The piece came into the auction carrying an estimated selling price of $6.2 million to $8.5 million. The hammer price was $7.2 million. 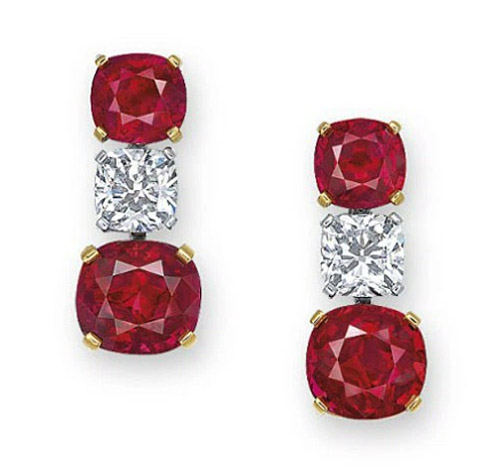 The second half of the suite was a pair of ruby-and-diamond ear pendants. Each earring featured two cushion-shaped rubies spaced by a cushion-shaped diamond. The larger rubies weighed a bit over 5 carats, while the smaller ruby of each ear pendant weighed about 2.5 carats. The diamonds in the middle weighed about 1.5 carats. This lot carried a pre-sale estimate of $2.9 million to $4.1 million and eventually sold for $3.1 million.